The Pollard Package: How to beat the All Blacks 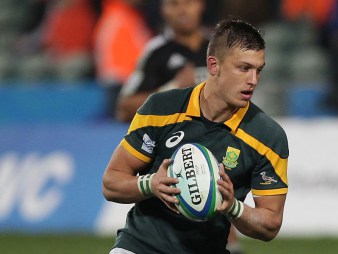 Heyneke Meyer must have been left scratching his head after the recent Australasian tour, and wondering if he will ever beat the All Blacks in New Zealand. Well Heyneke, you’ve done some pretty awesome stuff in your Bok coaching role to date , but it’s now time to lift your game to the next level. It’s time to lift the ante, and the answer is staring you right in your face – The Pollard Package! When things are just not working out against New Zealand, it’s time to implement what is called a radical tactical shift!

A legendary Manchester United striker of yester- year recently commented that if he had  David Beckham in his team, he would have scored twice as many goals, as he did in his brilliant career. He was alluding to Beckham’s split second precision passing into the box. Yes, David Beckham was what can be termed a ‘plus one second ‘player. And, at the very top level this makes all the difference!  But, Heyneke if we look at your selection in Perth, you started with two halfbacks who are both ‘minus one second’ players. Add that up and your half backs are minus two seconds!  Now, this can still win you games versus lesser opposition, but you will never win against the top team in the world – the All Blacks.

In reality, by the time poor Jean de Villiers sniffs the ball, he is in dead man’s alley, with very few options left – as the hunting pack (opposition loose forwards) have a two second advantage. Now, we all know that Richie McCaw is a great player, but at age 33, he is no longer as quick as he use to be. So of course Richie loves it when you pick ‘minus one second’ half backs!  He has a field day! And come on Heyneke don’t be fooled by the high ratings the New Zealand rugby community place on Morne Steyn’s head – they are just playing you! In reality, Morne only played with any confidence and authority when he had the genius of Fourie Du Preez on the inside – a player who can be described as a ‘plus two second’ player himself. That is how good Fourie still is!

So, what is required is a radical tactical shift in selection. Pick your team as if you’re in Richie McCaw’s changing room discussing the real Bok danger men that need to be closed down! Work out who they do not want to play against, and pick your team accordingly. Here is what is probably currently playing on Richie’s mind, and he wishes does not appear on the Bok team sheet – and it’s in the order of highest danger  Bok effectiveness    :

And then fill in the rest of the team sheet with all the other great players the Boks currently have in their ranks!

So the key lies at half back, where we need ‘plus two seconds’, not ‘minus two seconds’. We’re all lucky to be watching a Springbok rugby genius emerging in Handre Pollard – a player who can be described as the full package. He has it all and he seems like a fine level headed bloke as well! To date he has not played many games in tandem with Willie Le Roux,  but he is sure to develop a devastating fly half / full back interplay , like we saw with Freddie Michalak and Patrick Lambie at the Sharks !  Richie McCaw must be seriously worried about the options the Boks have coming up to RWC 2015.  At 34, he is unlikely to get too close to many ‘plus one second’ players, and we saw this with the Pollard/ Hendricks try on Saturday.

But, we also have our challenge in that Fourie Du Preez is now 32 , and the RWC 2015 will be his swansong. Ruan Pienaar at ‘plus one second’ and predictable is certainly not the answer! Let’s see what Francois Hougaard can do?  Heyneke, we need to take into consideration that you have seldom backed him to start at scrumhalf and he has had the ‘Oscar Pistorius cloud’ hanging over his head for nearly two years, which can only cloud his decision making. But, what must not go unnoticed was his superb pass that led to Pollard’s drop goal on Saturday. Maybe he is a new man now – free of the close Oscar situation that must have affected him in some way.

One thing is for sure:  A du Preez, Pollard and Le Roux combination will beat the All Blacks wherever they choose to play! That’s because these players create seconds, options and choices! And that is exactly what the All Blacks just hate to play against! They are forced to close these players down!  And that is what erodes their focus on their own game plan . Well done Heyneke, but it’s now time to up the Bok game plan.  The Pollard Package is the real game changer!