Nothing better than a great comeback story: Rilee Rossouw bounces back from KOLPAK fiasco 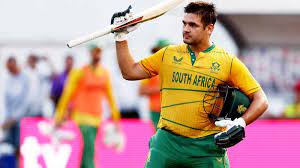 KOLPAK DEFINITION: The Kolpak ruling is a European Court of Justice ruling handed down on 8 May 2003 in favor of Maroš Kolpak, a Slovak handball player. A Kolpak player, or Kolpak, was a term used in the United Kingdom for people from overseas playing in the domestic leagues in cricket & rugby and who were subject to the Kolpak ruling. However, the system no longer applies in the UK, following its exit from the European Union.

The CRICKET WORLD CUP 2015 was a very difficult one for many protea players. SA CRICKET WAS IN A TOTAL MESS > and then there were KOLPAK INTERNATIONAL rules to now consider in ENGLAND…   Kyle Abbott, who was the outright form bowler, had just been dropped on the eve of a semi final for quota reasons. Captain AB de Villiers had been overruled with selection and did now know where to turn – family or playing winning cricket with the best possible team.

Rilee Rossouw had also just come off his 122 innings at Newlands to win a Man of the Series award vs. Australia.

No wonder  SA  lost the 2015  semi- final to  New  Zealand .A circus if ever there  was one. GREAT TEAM WITH INTERFRENCE FROM THE BOARD .

Two great cricketers lost to the proteas- with others to follow.

Now Rilee is back and in superb form with 96*   from 55 balls last on Thursday.

I cannot wait to see what happens Sunday in the T 20 decider.