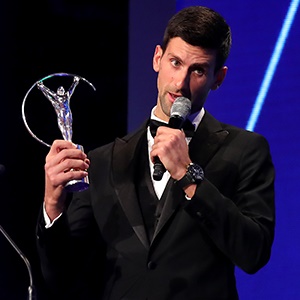 Novak Djokovic’s acceptance speech at this year’s Laureus Awards was crammed full with wisdom – and some brutal honesty.

Yes, even the greatest of the great champions have to dig deep at times.

Some bounce back – some don’t.

Forced out the game to undergo surgery after the 2018 Australian Open, Novak revealed how for him it was actually a three year period on introspection.

A reality check on life – or what he likes to call a period of ‘ Inner Engineering’.

His wife, Jelena playing a huge part in resurrecting a career that was on the verge of destruction.

His injury forcing him to take heed.

He himself admitting that he had difficulty rejoicing in his success and its “meaning”, revealing that he felt “relief” more than anything after achieving his momentous calendar grand slam.

Back at Roland Garros 2016 when I achieved the ultimate goal of tennis to hold all four slams at the same time, I felt a huge relief, I did not feel fulfilment to be honest : Novak Djokovic

Like so many other great champions, Novak had fallen into the human trap of :

He revealed how he had struggled to find purpose.

I tried to understand why, and I think it was because I didn’t embrace or I didn’t live the process or the journey as much as I needed – and wanted that destination or that achievement of that goal. When I actually reached it, I realised that the goal would be nothing without that journey.

Chasing the game – chasing the result  – serves only to steer a great champion towards injury – sometimes even total ‘burn out‘.

Tiger Woods is another case in point.

‘Inner Engineering’ is to embrace the power of sport, which comes through an understanding of its purpose:

To Entertain, to Educate and to Enrich the lives of others.

Injuries tend to take a back seat when a champion steers clear of : ‘chasing the game.’

No matter how big or small your role may be on this planet, it’s unwise to’ chase the game’ in life.

Success is found in the journey – not the result.

Thanks Novak for sharing that.

He helps both teams and individuals to achieve their greatest potential in life.

GET IN TOUCH: BOOK ROB TO TALK WITH YOUR TEAM .