It’s tough to take , but the measure of any player – or any team – is how you react to the worst of times , as well as the best of times . Jonny Wilkinson

It’s never easy to just sit back and watch the current demise of Bok rugby.

We continue to produce so many truly great players, yet our current win ratio sits at a lowly 30 %.

Our world ranking has now dropped to a lowly No 7 in the world.

It’s at times like these that one needs to implement what we refer to in the performance coaching world as a R.T.S.

Half hearted measures, or wishy -washy management calls, do nothing to help turn around teams with win ratios as low as 30 %.

Greatness is achieved by placing the focus on ‘’the why’’ – not on ‘’the what’’.

Steve Jobs built one of the greatest companies in the world because he started with why – focused on  ”the why”.

He did not start a company that made great computers – he started a company who wanted to change the status quo – to think differently.

That is a recipe for average, at best good. Never great.

It’s also the difference between teams which are inspired – and those that constantly need to be motivated.

Come hell or high water; please do not pick any overseas based players.

The All Blacks have a steadfast rule.

If you want to wear the All Black jersey – you must play your rugby in New Zealand.

There are no exceptions, no excuses, no explanations…

Any player who has chosen to play overseas has spoken. Their number one priority is no longer with their national team. They are no longer aligned with the priorities of the national team – the inspiration has waned.

They are playing for money, themselves and their families. I’m not saying there is anything wrong with that – but they will no longer be able to add value to the BOK HONOUR CODE

We must back our youth. Moving forward we must send out the right message to our youth.

Those who play their rugby in South Africa must be rewarded with Bok caps – and go on to play in the 2023 World Cup .

Surely RWC 23 must be in South Africa – if we send out the right message now.

It’s not just about rugby – it’s about building our nation .We all witnessed what the 1995 RWC and 2010 FIFA WORLD CUP did for our country.

Why we still continue to pick overseas based players, by exception, makes no logical sense –and does nothing to build our future .

Londolozi’s  Ian Thomas once told me an inspiring analogy about lions: 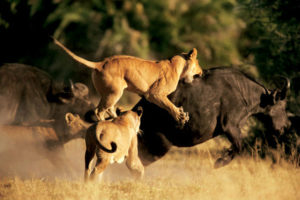 When Lions go in for the kill on a 900 kg Buffalo – they go in together –  aligned and united in trust and purpose.

No lion will wander off chasing warthogs. When you want to be No.1 in the bush – there are no easy pickings – no easy takings.

STEP THREE. PICK A CHARISMATIC CAPTAIN – A CAPTAIN TO LEAD FROM THE FRONT

John Smit played 111 matches for the Springboks, captaining his country on 83 occasions with a win ratio of 72 %.

What set him apart as a leader?

He had a unique ability to unite diverse people in mutual trust and purpose.

He fostered and built national gees.

He put the focus on where it should be – on our strength – building unity through our diversity.

The Blitzbokke have shown us how it’s done – focusing   on what we can all build together – rather than ripping into each other at every opportunity.

So have the Lions – and it has much to do with another great charismatic leader. 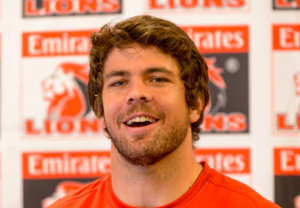 In Warren Whitely we have a leader cast in the same mould of both John Smit and Gary Teichmann – fully capable of inspiring and helping the Boks to bounce back.

Charisma comes from having clarity of why – and can dig any team out of any deep hole.

Warren Whitely has played a huge part in helping the Lions take a step up to the next level of performance, growth and contribution.

It’s time to leverage that kind of leadership skill at national level.

Here it’s in a nutshell:

3.  Pick a CHARISMATIC CAPTAIN to lead from the front

It’s high time for the Boks to bounce back. The opportunity gap is there.

Their win ratio is very impressive, but since the loss of a great leader in Richie McCaw- the cracks are beginning to appear. Their ‘Honor Code’ off the field of play has been broken more than once – with many incidents in 2016/7.

These will soon begin to impact on the field of play.

The opportunity gaps will open for teams like England and SA to challenge for the No 1 World ranking.

The moments that challenge us most – define us. Lewis Pugh

Last year I had the opportunity to meet and chat with one of Durban’s unsung heroes.

He may not have the fame of local rugby and cricket stars, but chat to anyone who knows surfing, and he’ll be described with hushed respect.

Why does he do it?

It’s the challenge to win against the odds of nature – in surfing’s most extreme discipline.

In surfing, coming to terms with death – or at least the possibility – is an ongoing crisis in big waves. The set is building outside, and it’s so beautiful, aesthetically. People are watching in awe from the beach: the blue water, the stiff offshore winds, the 40-foot walls charging in from the open ocean. If you’re out there with nothing but your body, your wits and a surfboard – that set can easily be your coffin.’ – Bruce Jenkins 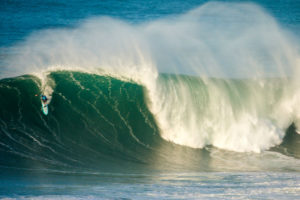 It takes something special to put your life on the line every time the big swells roll in at the world’s famous big-wave breaks. Take Portugal’s storm driven Nazare Challenge as an extreme example . You need to be ultimately prepared. Apart from unwavering commitment, Baker’s secret weapon in his preparation is what he describes as his ‘free diving training programme’. 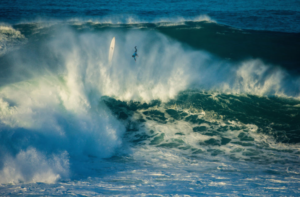 It’s a hectic training programme – it normally leaves me lying on the side of the pool for a very long time. But it also provides me with the confidence to be underwater when things go wrong and to know my limits. You aren’t normally under for longer than 45 seconds to a minute, but you learn to calm down and trust in your own ability. I have worked my way up to breath holds of five minutes, which really helps in the long run – Twiggy Baker

He exudes Faith, Confidence and Belief : and FCB is a potent champion’s cocktail .

What sets this 43 year old 2016 /17 world champion apart, is that it’s not all about competing and winning.

I look at every session as a learning curve and a stepping stone to the next level of performance, and I guess life is just like that. Listen, look and learn, because you’re never as good as you think you are.’

Twiggy Baker is an ocean warrior, a world class waterman , a great champion in a sport that throws out massive life challenges –and is always coming up short on sponsorship .

After losing his  Billabong sponsorship in 2013 ,Grant Twiggy Baker knows all about turning adversity to advantage .

It’s not all about surfing – to give back is more important at this time of my life: Twiggy Baker 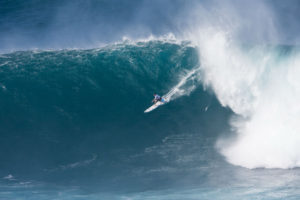 Asked about his plans are for the future, Baker with an attitude of gratitude, replied

I’m going to compete for as long as they will have me in the events. I’m feeling fit and healthy and I enjoy the experience of competing occasionally – getting to surf waves like Mavericks and Jaws with only six guys in the water – is a blessing.

Grant Twiggy Baker – we salute you as our latest World Champion  – in and out of the water .

Grant Twiggy Baker features in my first book published in 2013: THE GAME PLAN . At the time of writing the book in 2013/14 , Twiggy had just lost his BILLABONG  sponsorship , but he bounced back and went on to claim two World Titles. That says it all about the man.

If you would like a FREE eCOPY of my book –  please email as below .

Andy Birkett. For the love of sport.

Greatness is determined on and off the field of play

He shared some valuable stories.

Here are some insights into the world of paddle and portage:

He participated in a sport which today remunerates its top athletes handsomely.

Andy Birkett, at age 26, has already won the Duzi 7 times, but he participates in a sport that barely covers the cost of his expenses.

Why does he do it – for the love of sport?

If there was no prize money we would still do it: Andy Birkett.

A valuable lesson for many of today’s sporting professionals who chase the money – chase the results – chase the game.

Then one day it dawns on them that they are no longer enjoying themselves – playing sport.

This year’s Duzi was always going to be one of the toughest – due to very low water levels. But no on could have foreseen the drama that would unfold next.

With temperatures soaring into the 40‘s, portage was not the best option.

The final day dawned and someone had made a ‘’ Oscars ” like big mistake-  by keying in the wrong numbers – the result was that nearly zero water was  released from the Inanda dam  for day three .

The final 36 km final day would set the athletes apart.

Andy Birkett had another view on it, complimenting Hank McGregor.

Hank is a great runner, but no human being is designed to run fast with a 12 kg canoe, plus 1 kg paddle over that distance – in that kind of heat.

Dusi 2017 will definitely go down in history as one of the toughest in the history of the race! Well done to each and every paddler that made it to Durban and especially to Andy & Abby for your wins.  Hank McGregor

Ride Your Own Race.

There is a reason why the Dusi has been dominated by the likes of Graeme Pope Ellis, Martin Dreyer, and most recently Andy Birkett.

It takes more than just Talent, Technique and Training.

I was tired but I wasn’t stressed because I know that if you stress then you have the chance to make mistakes. Two years ago I made a big mistake at Thombi and Hippo Rapids, purely because I was stressing about being caught instead of concentrating on your own race:      Andy Birkett

Sport is tough enough without stressing about the opposition. It’s best to focus on what you are great at. 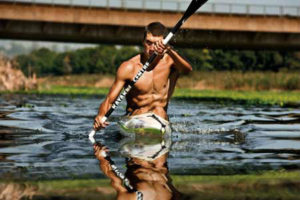 That makes for a powerful champion’s cocktail

Whatever he does next – whatever sport he chooses –   whatever he puts his mind to – watch out.

Being out on the water when the conditions are good is something that’s hard to beat. Andy Birkett