Not since Palmer ,Nicklaus and Player ……

With all sporting eyes on the United Kingdom and Rugby World Cup 2015, most of us will not have even noticed what transpired in America this past weekend.

Exciting times are ahead for world golf, as Jordan Spieth, Rory McIlroy and Jason Day seem to be fully capable of forming a tripartite domination, which was last witnessed with the sense of certainty of Palmer, Nicklaus and Player– who together raked in 34 majors. 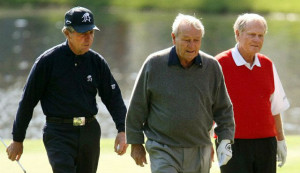 Last week it was Australian Jason Day who took hold of the World Number One ranking, but that only served to fire up two time major winner this year, Jordan Spieth. On Sunday Jason Day’s stint as world No.1 was over after just one week , as Spieth usurped him by winning the Tour Championship and season-long FedEx Cup .

Spieth capped off a stellar year with a huge $US11.4 million payday, shooting a final round one-under-69 to end four shots clear of the field.

With his fifth win of the year, including the Masters and US Open, Spieth broke the PGA Tour money record by adding $1.4 million for the East Lake win, taking him to $US12,030,465 for the season. Add to that the FedEx Cup bonus of $10 million as well, making his 2015 season worth more than $22 million.

Jordan Spieth had the following to say about Jason Day’s rich run of recent form:

It makes me want to get back to the level I was playing at this whole year, to get on top of my game. And then see if the top of my game can beat the top of anybody else’s game when they’re at their very best.”

Now, these three players will certainly be looking for some long rest, as they fire themselves up for who will win the majors next year – and who will step up to the next level of great in 2016.

Even after the disappointment of Henrik Stensen draining a 57-foot birdie putt on the last hole on Sunday, which relegated him to third in the season-long points, and dropped his bonus money from $US3 million to $US2 million – Jason Day had this to say:

It’s been a great year. To be able to win a Major Championship, and then also to get to No. 1 has been a life-long dream of mine. Now that it’s over, I’m looking forward to getting some rest. Really trying to take care of my body in the off-season to come back as a new person for next year. And a lot more motivated a lot more hungry to stay on top of the world.”

Three Great Champions with a mindset made of ‘the stuff of champions’ – Faith, Confidence and Belief.

The synergy between my body and my golf swing is matching perfectly. That’s where I can just get up there and I can rip at it, get the ball down as far as I can. ” said Day.

Now, it’s not only the individual synergy, but the tripartite synergy of these three young golfers, which is most likely to set the golfing world alight in 2016 and beyond.

Heyneke Meyer must have seen a lot in his stellar coaching career, but not much could have prepared him for what transpired in last Saturday’s Rugby World Cup opener against Japan.

The Japanese running out deserved 34-32 winners.

With many of his players currently plying their trade in Japan of late, Heyneke Meyer must have known exactly what the individual Japanese players where capable of.

But, what even he could not have foreseen , was  how the ‘Brave Blossoms’ would perform as  ‘a formidable collective’ on the World Cup stage.

It would be a sneak attack, and not many would see it coming.

Six months prior to  the Rugby World Cup , Eddie Jones , the Japanese coach had posted the following words in the Japanese change room at their training base

The hunter suddenly becomes the hunted. Sometimes the underdog can even become ‘the destroyer’. Your opponent brings ‘E’ Power into play – ‘E’motional power .They harnesses it, they leverage it, and suddenly it’s not about reaching the next level, but rather about going to a whole new level of performance.

‘E’motional power has the effect of quickly closing the talent gap – and it can produce awe inspiring results.

In sport, emotional power is primarily triggered when an individual or a team finds meaning and a higher purpose in winning.

Either way your opponent catches you completely off guard .It’s as if one can prepare and prepare, and then one day nothing seems to go right.

That day someone or some team just has your number.

For Eddie Jones and his  Japanese team , September 19 was to be played as if it was a Rugby World Cup Final

Emotional power can produce devastating results, but like with many things in life ‘E’ Power also presents a dangerous paradox – as it can be leveraged positively and negatively.

On Saturday we welcomed a new nation on the rugby stage – and with the Rugby World Cup to be contested in Japan in 2019  – that can only be a great thing .

We desperately wanted to make a statement, we wanted respect from the rugby world- Eddie Jones

Well done to Eddie Jones and the ‘Brave Blossoms’ who announced themselves superbly on the world rugby stage.

For us back home, it showed that our nation has something that few other nations have in abundance – an ability for most of us  to keep smiling in the most testing of times – and keep growing .

Now, with their backs firmly against the wall, the Boks will have to show that they are still ‘the hunters’, and not ‘the hunted’.

It will take plenty of Faith, Confidence and Belief  – to bounce back harder.

And something we have all come to know so well . It’s called

It has long been our No.1 Game Changer.

An Attitude of Gratitude

It means that the advantage of youth can only count for so much – it can only take one so far – then it is about head and heart. And listening to both players it’s certainly not all about winning – it’s more than that to the great champions.

Djokovic had this to say:

I love this sport and all these achievements are incentive for me to keep on going. I have tremendous respect for Roger and the challenge he presents. He’s the best player ever. I knew I needed to play at my very my best .It’s an incredible evening. I’m enjoying this year more than previous years because I’m a husband & father. And that makes it even sweeter.

The veteran Federer who has recently found a new leash of life with his “SABR – Sneak Attack by Roger” – approach to the game , had this to say:

I love tennis. I’ll see you back here next year, I’m pleased with where my game is, but playing a great champion like Novak is always difficult.”

Both players displaying great humility and an attitude of gratitude for the game they love – both entertaining, educating and enriching an  overwhelming hostile crowd crammed into the Arthur Ashe Stadium – and millions of TV viewers around the globe.

Now cast your mind back to another tennis great of many moons back. The story of US tennis great Andre Agassi is a fascinating and inspirational one.

Nicknamed “The Comeback Kid,” Andre Agassi was one of the world’s most beloved athletes and described by the BBC on his retirement as ‘perhaps the biggest worldwide star in tennis’s history – a tennis genius.

Possessing a lethal return of service and phenomenal hand–eye coordination that allowed him to take the ball early, Agassi is credited with helping revive the popularity of the game in the 1990s, with his flamboyant, unorthodox and non-conformist approach to tennis and life.

At age 25, Agassi was world number one, but by age 27 his professional and personal life had all but imploded, his world ranking slumping to 141. Luckily a chance meeting was to change the way he played the game of tennis – and the game of life. 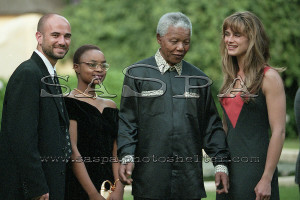 18 months later Agassi reclaimed the No.1 ranking in the world.

Madiba had sparked a remarkable metamorphosis in a remarkable champion. Agassi, like Federer and Djokovic years later, had developed a deep new appreciation for the game.

It took me decades to figure out that we are here to do – to do good quietly, to shine in secret, to give when no one is applauding, to give of ourselves to someone who can offer us nothing.”- Andre Agassi

Agassi is now recognized as one of the most charitable and socially involved ex-players. A Great Champion with an

Posted on: September 7th, 2015 by Rob Opie No Comments

Adversity is the diamond dust that heaven polishes its jewels with.– Thomas Carlyle

Summer is finally here and next week the nation’s focus turns to Rugby World Cup ‘15.

Thankfully this time around it’s all happening in our time zone, which allows for far better broadcast times than the previous rugby and cricket World Cups held down under. All looks sunny and bright for most South Africans, but it may yet prove to be a cruel summer for Heyneke Meyer ?

Hopefully that will not be the case.

Sporting World Cups provide us with the perfect opportunity to unite our nation. Sadly, this time around, the Springboks will leave our shores having had to again face adversity from off the playing field.

But, in their hearts they will know that it’s the great champions of sport and life, who are known to draw inspiration though adversity.

They all inspired through adversity. It’s what sets them apart.

It is no coincidence then that an inspirational bond exists between high-achieving athletes and disabled siblings.

While all three athletes compete in sports that encapsulate the notion of the international jet-set, they all still possess the same sense of grounding which comes through observing adversity close by.

It comes from a home environment that reinforces a bigger picture; one that serves as a constant reminder of good fortune and inspired these champions to make the most of their advantages.

It’s about taking every opportunity out there.

He’s my everyday inspiration, sometimes I wake up in the morning and it’s rainy and I don’t want to train or go out and ski. I look at my brother and if he had that chance he would go, he would grab it.” – Alex Bilodeau

While Spieth is busy taking on Rory McIlroy and the like , he finds inspiration by the thought that not every human is allowed his or her destiny.

It then becomes a duty to take that test on. And humbly appreciate it.

Golf is not my life – it is part of my life.” – Jordan Spieth

Spieth often appears unruffled in the heat of battle. That nature comes, his family explains, from leading a domestic life that cannot promote him as the star of the show, no matter his own noble achievements.

His father Shawn giving him the following advice before he teed off on the final Sunday at Augusta earlier this year.

The Masters is the greatest game, but it’s still a game”.

Spieth, Hamilton and Bilodeau have the advantage of seeing the bigger picture. They draw strength from adversity.

Hopefully, Heyneke and our boys can see the bigger picture – and build a stronger bond though adversity.